Thirty minutes until the premiere of Me and the Krinkles. We were all excited, nervous, amazed that this was finally happening— the playwrights, their families, the cast, me…
Programs were handed out—attractively designed, of course by the Renaissance young women Eva Perkins and Ashley Berrett. They were communicating with the lighting crew and their cast, had arranged for Al and me to sit center stage with their families, and saved a temporary seat in the front so I could quickly join them on stage when they called me up. After years of appearing in productions themselves and directing younger students, they were astonishingly professional.

Many audience members thanked Al and me for coming to the premiere.
I paced in the hall for a few minutes, memorizing my remarks to the audience. 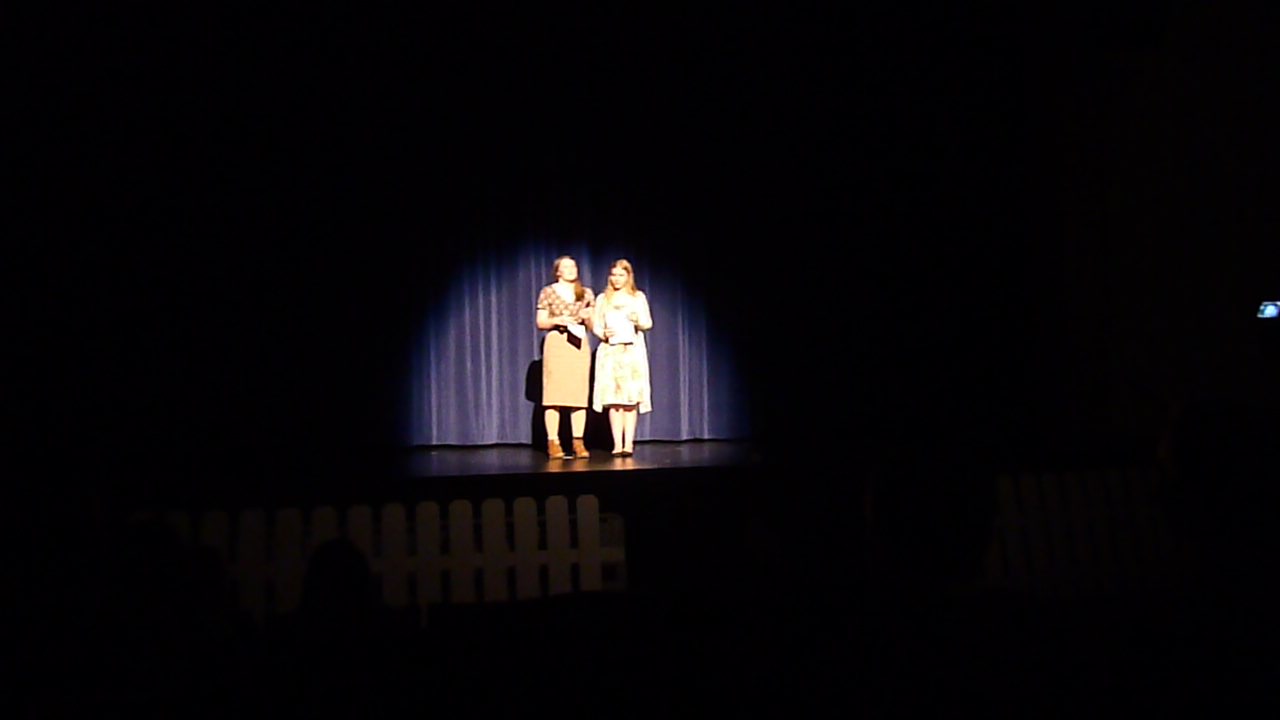 Spotlight on the young creators, who addressed the audience before the play began 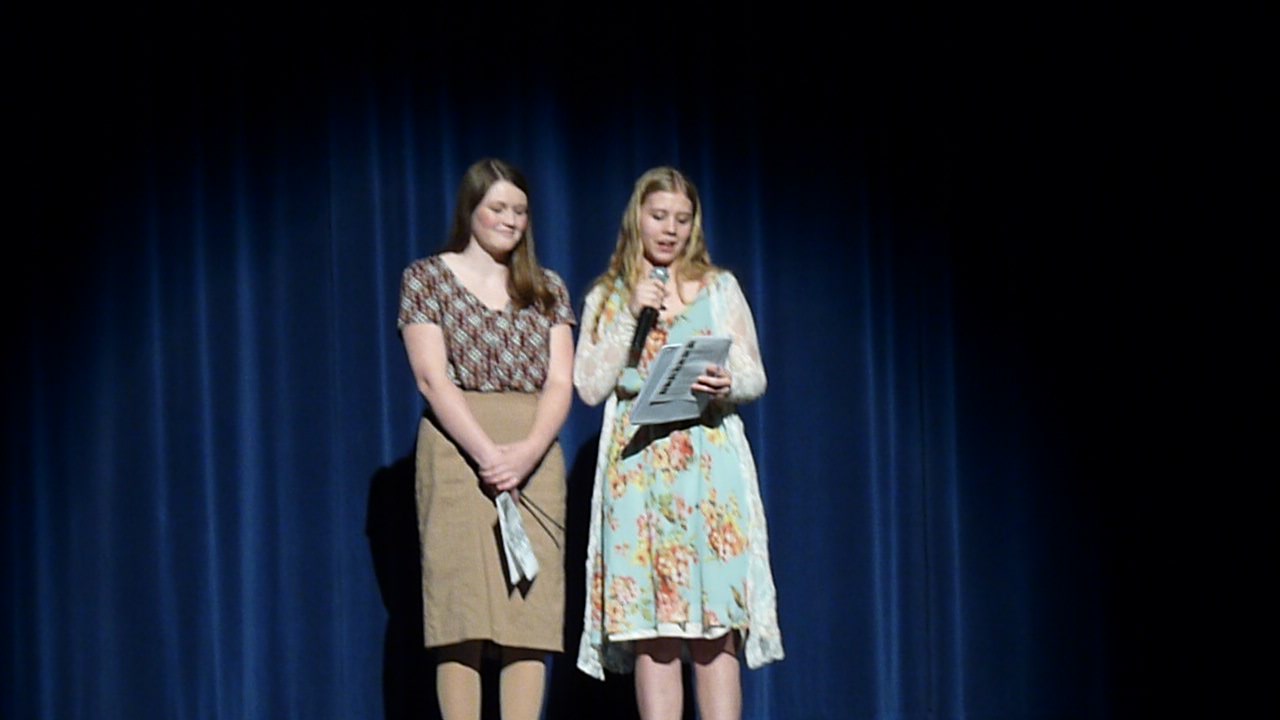 The girls spoke about their wonderful experience writing the play and directing the cast, how much its message of acceptance and the ability to grow and change meant to them, and then they said they had a surprise— the author of ME AND THE WEIRDOS, the novel upon which the play was based, was there (my cue).

I spoke from my heart, talking about reading Ashley’s and Eva’s initial email—the sweetest, politest one I’d ever received,  how impressed I was by their composing and writing talents, as well as “the warm welcome Al and I received from Eva’s and Ashley’s families and the whole town!” Almost starting to cry,  I said, “It’s deeply touching to me that the humor and the message of the book, that it’s OK to be different, still resonates.”

The girls presented me with a large play poster signed by the cast, now proudly displayed in my home. To see more photos of the performance and the girls’ and my speeches, see this article, with accompanying slide show and videos.

Now the colorful set—created by Eva’s father—was revealed, and its terrificc details, before even a line was spoken, brought my book to life! Then the play began … 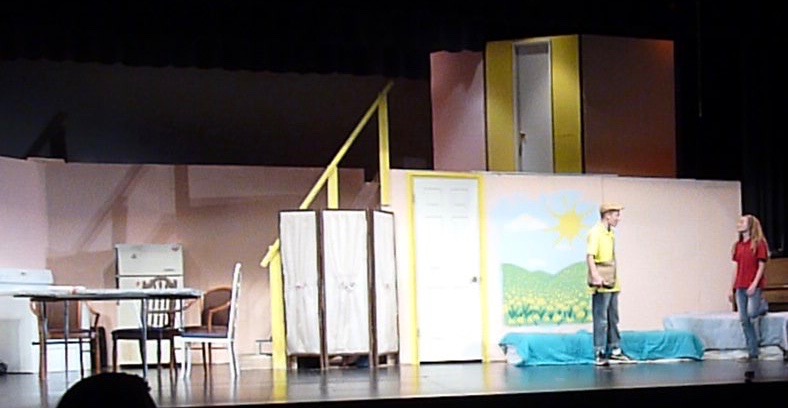 The two-act play was delightfully entertaining, as well as moving. There were many lines that made the audience roar with laughter, and beautifully sung songs that brought us close to tears. It was a thrill for me to hear the talented middle school actors say the lines I had read in the script. And to hear how well the music with its pleasing, hummable-afterwards melodies meshed with the lyrics that effectively elucidated the plot. Eva had even composed music to play between scenes.

Ashley and Eva had done a terrific job casting the middle school students in their parts and directing them. The Krinkle family, visitors and friends were all portrayed expertly by the young actors, who sang well, too!

The staging was quite sophisticated, with actors popping up behind scenery to echo lines, adding to the humor of the production and allowing more actors to be involved. Sometimes two separate groups acted out scenes simultaneously, quite a feat. 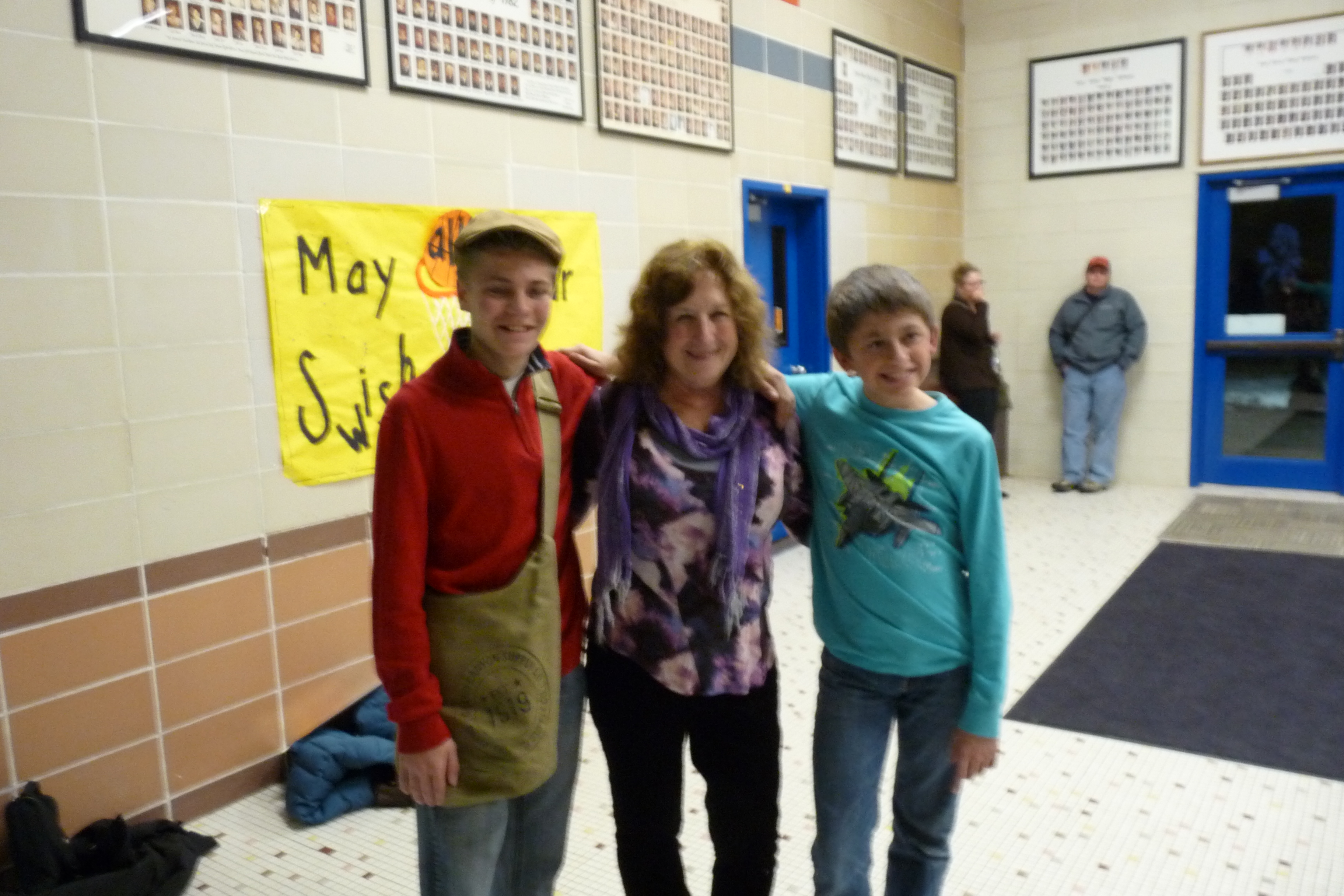 After the play, posing with the talented Elijah Ward (Roger Snooterman, the paperboy who sets the play in motion) and Toby Ward (Smith Krinkle, the odd but lovable father.) We were all thrilled to meet each other. 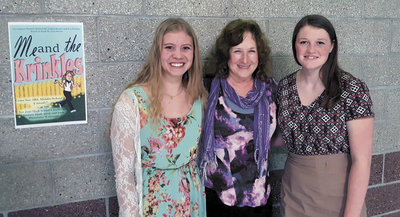 Post-play, we were beaming next to a poster. I told Eva and Ashley how absolutely wonderful I thought the play, music, staging, and direction were, and they told me that creating it had been a life-changing experience.