The Colonial Times, a newspaper in my town of Lexington, Massachusetts recently ran a lovely article about my experience bringing Me and the Weirdos back to life, inspired by its reincarnation as a musical. The reporter included details of my trip to the small town of Blanding, Utah, as well as the involvement of the illustrator and designer of the new edition, Doreen Buchinski.

How a middle-school musical in Utah brought Lexington author Jane Sutton’s most popular book to a new generation.

“I write because I can’t be a rock star,” says Lexington-based children’s author Jane Sutton, laughing. But a musical adventure in a small town in Utah in January 2018 gave her a taste of star treatment and prompted her to publish a new version of her award-winning novel, Me and the Weirdos.

Sutton’s books include seven picture books, three middle-grade novels, and one YA novel. Back in 1981, she wrote Me and the Weirdos, the story of Cindy Krinkle, a little girl who is embarrassed by her family. (Her mother does cartwheels, her father rides to work on a bike with an umbrella while singing operatic arias, and her sister has a pet sea urchin.) The book, originally published by Houghton Mifflin, was an ALA-CBC Children’s Choice, won the Utah Children’s Book Award and sold over 90,000 copies.

“The book brought me loads of fan letters from children, and from adults who said it was their favorite book, and made them feel being different was OK,” says Sutton. But Me and the Weirdos has been out of print for decades, so in 2017 she was surprised to receive a “long, sweet email, very polite and respectful,” from two high school seniors in Blanding, Utah, Eva Perkins, and Ashley Berrett, asking her permission to turn the book into a musical, Me and the Krinkles.

As a child, Perkins had read Me and the Weirdos, a favorite of her mother’s, and thought the story would translate well into a musical. She and Berrett wrote to Sutton, not at all sure that she would reply, and “screamed with excitement” when they received her positive response.

“I, of course, said yes,” says Sutton, “and asked to look at the script.” The script and lyrics impressed her with their professionalism and smart changes to make the plot more workable on stage, with a middle-school cast. As they exchanged drafts and comments, Sutton learned that the pair held scholarships in music and drama, and had appeared in and directed other productions.

Braving the flight from Boston to Salt Lake City – in January – followed by a five and half hour drive to Blanding (population 4000), Sutton and her husband, science writer and educator Alan Ticotsky, attended the premiere performance of Me and the Krinkles on January 22, 2018, at San Juan High School.

“We were blown away by the professionalism and wonderfulness of the play, as well as the warm welcome from Eva’s and Ashley’s families and the whole town,” says Sutton. From the motel to the visitor center to the museum, Sutton was feted as “the author” from out of town, and she and Al enjoyed private tours of local natural wonders, including a visit to Bears Ears National Monument with a Navajo guide.

The excited middle school cast asked Sutton to sign everything from programs and posters to phone cases and a plaster cast. Searching online for the original book, they were disappointed only to find second-hand copies at high prices. So Sutton came home with a mission to bring Me and the Weirdos back into circulation.

For years, Sutton has taught a sold-out class on “Writing Children’s Books” for Lexington Community Education. Now she turned for advice to long-time students who have become successful authors and illustrators, Josh Funk and Doreen Buchinski. “You should just get it out there,” said software engineer and prize-winning author Funk.

In the interests of quick turnaround, controlling the editorial process, and the freedom to choose her own illustrator, Sutton decided to self-publish the book using the Amazon Kindle Direct Publishing (KDP) platform. She invited graphic designer and illustrator Buchinski to design the new edition and provide new illustrations, and the two started work in April 2018.

Illustrator Doreen Buchinski with the new edition of Me and the Weirdos.

Buchinski enjoyed turning Sutton’s “rich descriptions” into graphite and wash drawings, and designed a new cover using her niece as the body-model for the heroine. But even as an experienced graphic designer, she found online self-publishing challenging. Unlike working with a printer with whom you have a personal relationship, with KDP “you don’t always get to talk to a person,” says Buchinski, so glitches that would be quickly solved in a traditional setting sometimes led to frustrating email chains.

“I’d always be finding things I wanted to change,” says Sutton, a self-described perfectionist. But by September, she had “revised, tweaked and pared” the text to her satisfaction, and by October the new edition was available in paperback and on Kindle. Sutton dedicated it to Eva Perkins and Ashley Berrett, in recognition of the creative partnership between two Mormon teenagers from Utah and a Jewish grandmother from Boston, an unlikely collaboration that’s real-life proof of the message of both book and musical, that “it’s perfectly fine to be different!”

The new paperback edition of Me and the Weirdos is available from independent booksellers and online. For more information, see www.jane-sutton.com 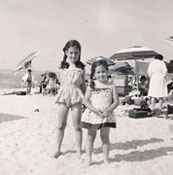 My big sister & me at the beach. 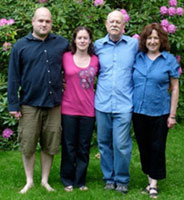 My family & me in our backyard. 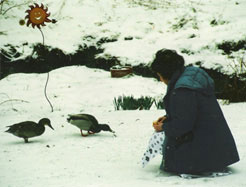 Visiting with my duck friends by my backyard stream (OK, I admit it—I was so excited to see them that I went outside in my nightgown.) 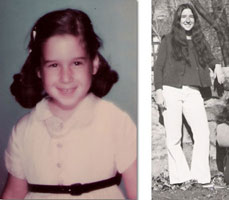 Me in kindergarten, and in college.